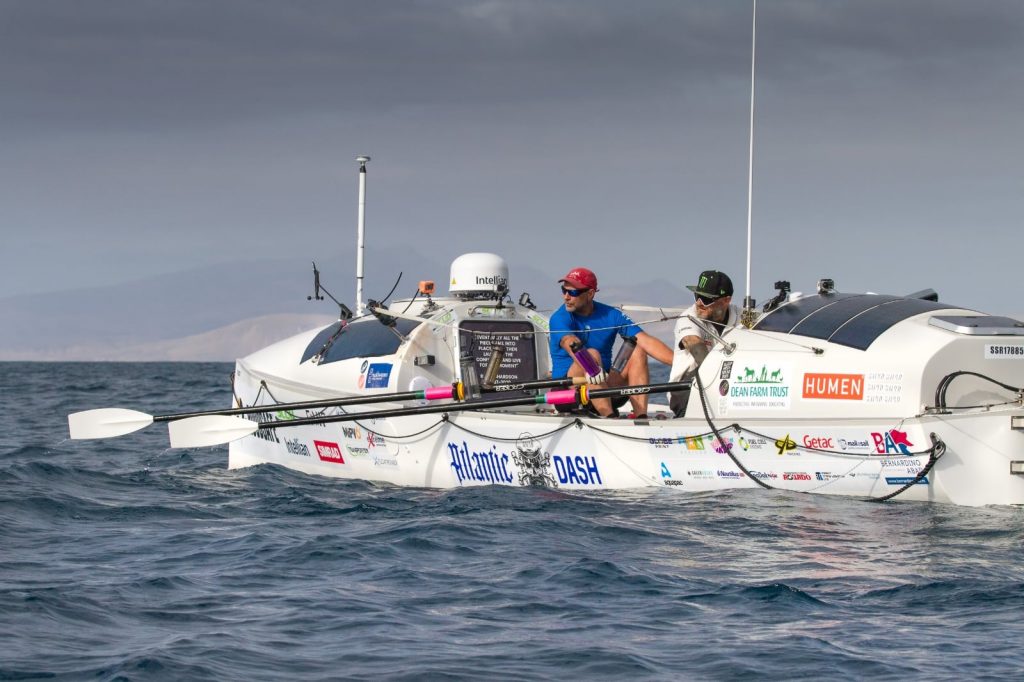 Globe Print supplied Drytac Polar Grip Matte film for an intense endurance challenge which saw a team of four men row 3,200 miles non-stop across the Atlantic Ocean for over 45 days.

Drytac’s Polar Grip Matte film was put to the ultimate test in the last couple of months when graphics printed on the material were featured on a boat crossing the Atlantic Ocean in an extreme endurance challenge.

A team of four men rowed, non-stop, for 3,200 miles from Lanzarote in the Canary Islands to the island of Antigua in the Caribbean, in a challenge dubbed the ‘Atlantic Dash’. Skipper Billy Taylor was joined by Johnny Ward, Matthew Pritchard and Martin Heseltine for the journey, which took 50 days, 5 hours and 12 minutes.

Such was the extreme nature of the challenge that Monkey Fist Adventures, organiser of the event, relied on Drytac materials – once again – for support in decorating the boat with striking graphics that would be able to withstand the harsh environment out on the Atlantic Ocean.

Globe Print, a long-term user of Drytac products, took on the task of printing the graphics, having previously worked with Monkey Fist Adventures on one of its previous challenges. The Marlow-based company used a Roland SolJet EJ-640 large-format printer to print the graphics on Drytac’s Polar Grip film which was then paired with their Interlam Pro Emerytex overlaminate.

Polar Grip is a self-adhesive vinyl for digitally printed graphics and signs, designed to look vibrant and remain in place for up to five years, making it the ideal solution for such a testing project.

The graphics, featuring the many sponsors supporting the event, were applied to the boat on location in Lanzarote prior to the team setting off on their journey in early March, with the quartet making land in Antigua on 2nd May 2021.

Barry Hayes, Director of Monkey Fist Adventures, said the decision to work with Drytac and Globe Print again for the Atlantic Dash challenge was an easy one, with the graphics used in a previous event having proved extremely successful.

“We’ve used other companies in the past, but on previous crossing we went to Globe Print, and apart from just being all round nice people, the Drytac products supplied were far superior to anything we’d ever used before,” Barry said.

“Oceans are harsh on everything, but our sponsors – and their logos – remained solid and steadfast for the entirety of both the Atlantic Dash crossings.

“The Globe Print team went above and beyond to produce the printed graphics exceedingly quickly – as they knew we had very tight timeframes.”

The latest Atlantic Dash challenge came about as the Monkey Fist Adventures team sought to restore some sort of normality after Covid-19.

Alex Mason, co-founder of Monkey Fist Adventures, had not seen her mother in more than a year due to the pandemic, while Billy Taylor, another co-founder who skippered the Atlantic Dash, had to endure his partner contracting Covid-19 while working on the frontline for the NHS. Barry Hayes suffered with mental health issues during the pandemic but was thankfully able to access the right support.

“After having to go through so many challenges and tough times over the past 12 months, we wanted to get back to doing what we do best, so we created an ocean row to try and reset the balance – and the Atlantic Dash was born,” Barry says.

The Atlantic Dash has raised more than £8,000 for two very worthy causes: HUMEN, a movement to improve and maintain men’s mental health; and Dean Farm Trust, an organisation committed to working for a sustainable, healthy and cruelty-free planet. This was less than hoped for, but with the constraints of Covid-19 it became somewhat challenging for fundraising to be as effective.

“However, the major goal of the Atlantic Dash was to get people talking about their mental health and it absolutely worked!” Barry concludes.