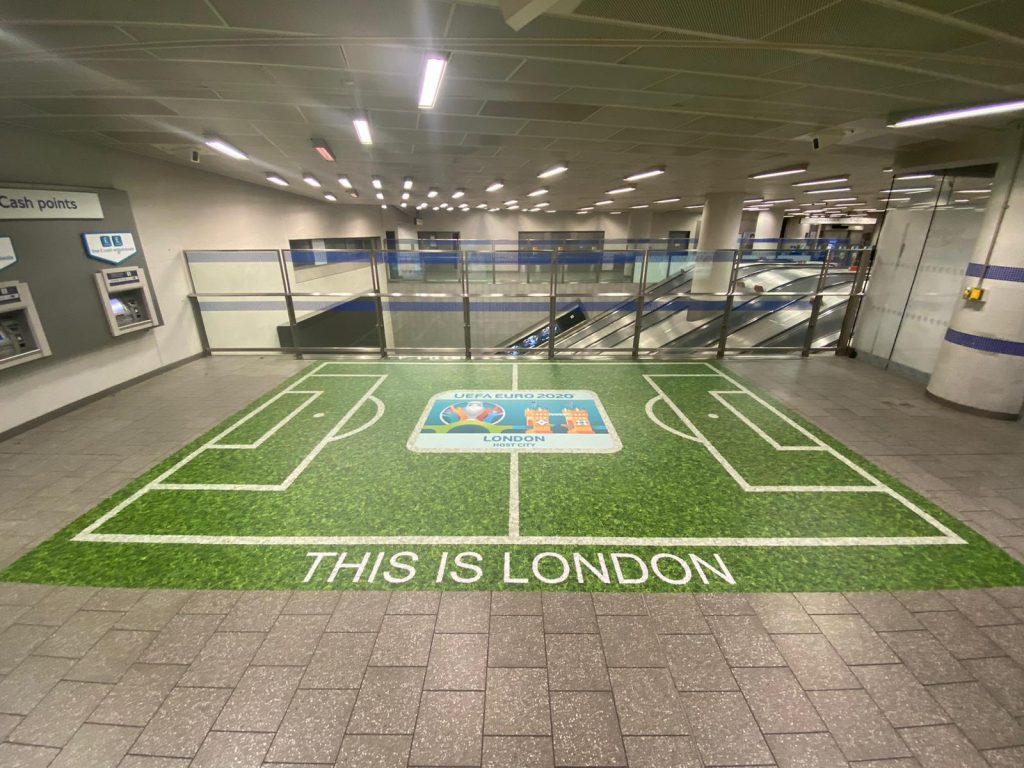 Euro 2020 had been due to take place last year but was delayed until this year due to the pandemic. The tournament is a special edition of the quadrennial competition, with matches taking place at locations right across Europe, as opposed to the traditional set-up in one country.

Wembley Stadium was one of the venues selected to host games, and to mark this special occasion, Transport for London (TfL) approached Links Signs to produce a series of themed graphics to accompany fans as they travelled across London to the stadium.

Graphics were installed at King’s Cross and Paddington – two of London’s busiest terminus stations – as well as Baker Street, London Bridge and Wembley Park, the latter being where fans exit the train to walk down the famous Wembley Way to the stadium.

Links Signs, an accredited printer and installer for TfL, worked with the commercial team at TfL and its agency to create a series of innovative and attention-grabbing graphics that provided unique photo opportunities for fans. Prior to installation, Links Signs met with the graphics agency at the proposed sites to advise on the best fit solution for the extensive, multi-site project.

The project included wall graphics at Kings Cross and Paddington that mimicked the players’ tunnel at Wembley Stadium, as well as football pitch floor graphics and a design that integrated existing seating at the station to give the effect that fans were sat on benches in the stadium.

All the Euro 2020 graphics were printed on Drytac Polar Grip polymeric self-adhesive vinyl, paired with Drytac Interlam Pro Emerytex which is fully approved by TfL and carries all the required fire and slip certifications and ratings for public spaces.

Links Signs used an HP Latex 570, installed 18 months ago, to print the graphics onto the vinyl and carried out installation of all the graphics over a period of five nights, in time for the start of the tournament on June 11.

Paul Cox, Operations Manager at Links Signs, said Drytac Polar Grip was the ideal solution for the job as it is approved for use in projects on the London Underground, adding that the product delivered outstanding results across the series of graphics.

“When working on projects for London Underground, we cannot use any materials that are not approved,” Paul Cox said. “Drytac is not only approved, but also an incredibly stable and reliable product that can be easily applied.

“We really liked working with the Drytac vinyl; it delivered exactly what it promised, and we will be looking to work with it on other projects we produce for TfL.”