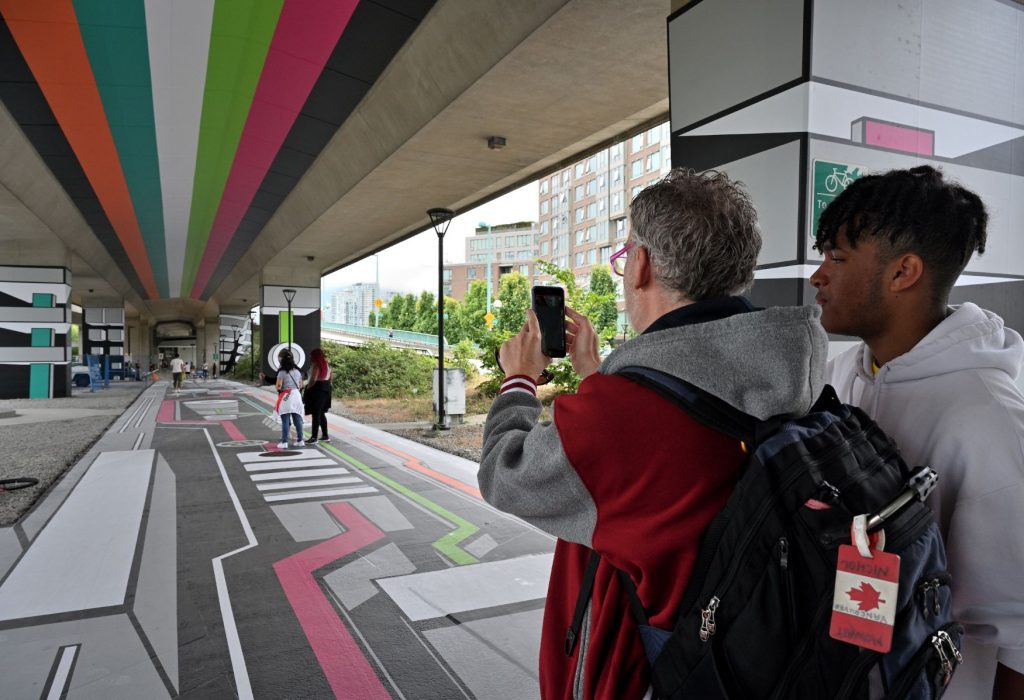 Canadian full-service graphics production and installation company Premier Graphics recently used a range of films and laminates from Drytac supplied by ND Graphics to produce a series of stunning and colourful graphics for an innovative project at the Cambie Street Bridge in Vancouver.

The project brought to life a vision by artist Jessica Angel, who came up with the clever idea of mixing colourful graphics with augmented reality (AR) to “extend” the Cambie Street Bridge into a 19,000sq ft public art installation for the Vancouver Biennale exhibition.

Installed in June 2021, Angel’s design featured a huge, two-dimensional vinyl mural that wrapped the pedestrian walkway, supporting columns and underside of the bridge, turning what is usually a relatively dull structure into an eye-catching piece of art.

However, AR took this a step further, with passers-by encouraged to download the Vancouver Biennale app for free and hold up their phone while walking through the walkway. Doing this opened up a whole new dimension, transforming parts of the installation.

Premier Graphics, based in Richmond, British Columbia, was selected to produce and install the graphics for the project. As a long-term customer of Drytac, the company chose to work with the adhesive science expert’s materials throughout the project.

“The process consisted of the testing of many materials, and of course balancing a budget that was already stretched thin,” said Taylor Sellinger, Partner and General Manager of Premier Graphics. “We needed to fit the client’s budget with a material that was likely to last 18-24 months and meet the slip-resistance requirements for the safety of the public.”

Taylor Sellinger said Premier Graphics selected Drytac materials as they were familiar with the products, having worked with the company’s films for several years. Moreover, the Drytac solutions also performed best in preliminary tests.

“We find Drytac films to be consistent in quality and the variety of adhesive types and styles make them a very diverse material,” Taylor Sellinger says. “Since the majority of this installation surface was relatively flat, we didn’t require a cast film to conform, but the nature of the adhesive on the Polar Grip film made it an ideal choice for great adhesion to a rough and unfinished concrete.

“While we’ve been working with Drytac films for the last four years, we were honestly surprised at how well they seemed to perform compared to much more expensive cast films.”

On the art project itself, Taylor Sellinger concludes: “The virtual reality experience developed is amazing when paired with the graphics. It’s certainly the most impressive piece I’ve been involved with so far.”